Socrates in Martin Luther King, Jr.’s “A Letter from a Birmingham Jail” 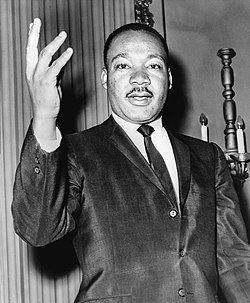 In 1963 Martin Luther King brought his campaign of non-violent resistance to segregation to Birmingham, Alabama. At the time Birmingham was one of the most segregated cities in the South and had earned the macabre epithet “Bombingham” after years of unsolved attacks on African-American homes and churches. When King was arrested on Good Friday for violating an ordinance that prohibited demonstrations, he took the opportunity to respond to Birmingham’s white clergy, who while claiming to support desegregation had advised against the protests, sit-ins, and boycotts advocated by King. The result is a classic document of the struggle for civil rights, “A Letter from a Birmingham Jail“.

Given his message and audience, King frequently seeks inspiration from Biblical sources, as well as from philosophers and theologians Christian (Aquinas, Augustine, Niehbur) and Jewish (Buber). At three points in the “Letter”, however, he invokes Socrates, both for his activist brand of philosophy and his practice of a just form of civil disobedience.

King deploys his first reference to Socrates in response to the imagined question, “Why direct action? Why sit-ins, marches and so forth? Isn’t negotiation a better path?”

But I must confess that I am not afraid of the word “tension.” I have earnestly opposed violent tension, but there is a type of constructive, nonviolent tension which is necessary for growth. Just as Socrates felt that it was necessary to create a tension in the mind so that individuals could rise from the bondage of myths and half-truths to the unfettered realm of creative analysis and objective appraisal, we must we see the need for nonviolent gadflies to create the kind of tension in society that will help men rise from the dark depths of prejudice and racism to the majestic heights of understanding and brotherhood.

This image of Socrates is familiar from Plato’s Apology: the gadfly of the polis, who is constantly “arousing and persuading and reproaching” citizens to perceive truth and justice. Athenians, of course, responded to the stings of the gadfly by executing Socrates. But King rejects the illogical notion that an unjust response to an act taints the precipitating act,

In your statement you assert that our actions, even though peaceful, must be condemned because they precipitate violence. But is this a logical assertion? Isn’t this like condemning a robbed man because his possession of money precipitated the evil act of robbery? Isn’t this like condemning Socrates because his unswerving commitment to truth and his philosophical inquiries precipitated the act by the misguided populace in which they made him drink hemlock?

In King’s final reference to Socrates, the philosopher takes his place in a list of historical figures who engaged in civil disobedience,

[Civil disobedience] was practiced superbly by the early Christians, who were willing to face hungry lions and the excruciating pain of chopping blocks rather than submit to certain unjust laws of the Roman Empire. To a degree, academic freedom is a reality today because Socrates practiced civil disobedience.