From my own personal Mt. Olympus (aka my living room), let’s take a look at the new and notable in the world of antiquity on-line: 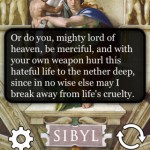